Who says you have to stop riding just because the sun has gone down?

Well, that’s what I used to think. Once we reached the point where we didn’t have enough evening daylight for our mid-week afternoon/evening rides they came to an end. Unfortunately so did the fitness until you started hitting the trainer.

This year a club member who grew up in Philly and used to do “night riding” with her club there has organized a night ride with our group.

Last week was the first one but I didn’t go. It was dark and windy. I had gotten home early enough to settle in for the evening and I would be damned if I was going back out on the bike.

This week was different. I had bike commuted to work so my return trip got me home a little later than driving. I was dressed and ready for biking so I didn’t change. The ride departure was also a little earlier, which meant there was less time to settle in. It was also warmer – in the mid 50’s.

I was excited and a little apprehensive, not ridden in the dark much. However, two days earlier I was out on a club ride and heading back when it was getting pretty dark. Surprisingly I felt pretty comfortable with it so I was ready for a full-on night ride.

A small group met at 6:10 to head north to rendezvous with another group 15-20 minutes away and then we headed off as a larger group. There were 11 of us total with a nice mix of men and women. Everyone had at least one head and tail light on. Some of us had two, like me who had a bike mounted front/rear light in addition to a head lamp and rear light on my helmet. Many of us also had reflective clothing on, or additional items for reflection. In short, we were highly visible and I was really surprised at how much we lit up the road.

I found the drivers seemed more courteous as well. I’m sure many of them were more than a little surprised to see a group of hearty, and perhaps a little crazy, cyclists out on an evening ride well after sunset.

We ended up with a 30-mile route and the pace was such that we all stayed together. That’s key so no one gets dropped or left behind in the dark.

Two hours later I arrived back home and thrilled about my first successful night ride and looking forward to next week’s ride with my fellow night riders.

The 2011 cycling season is in full swing. Or at least as much as the weather will allow. A fair bit of rain has prevented a few weekly rides but we are still managing others.

Spring weather in Maine can be hit or miss. I’ve seen 70-80 degree days in early April and also full on snow storms. Such was the case on April first this year with a good 6-inches of heavy wet snow. The up-side, if there is an up-side, to those types of storms is that the snow is virtually gone the following day.

Last week we gathered for a Wednesday night ride. The afternoon was filled with glorious sun and blue sky. By the time we gathered to ride it was overcast, windy, and snow falling from the sky. But that didn’t stop the 16 or so women who showed up to ride. The adage, “If you don’t like the weather in Maine, just wait a minute” held true because about 20 minutes into the ride it was sunny and warm again.

Regardless of the up and down temps and precipitation, we are officially on the road. Most of the roads have seen at least one pass of a street sweeper, so it was time to pull the Aegis off the trainer, swapping out the trainer tire for a road tire, and prepare it for the road.

Yup, it’s officially spring and the biking season is upon us. We’ll still be faced with cool weather wardrobe decisions for a few weeks yet. You’ll hear no complaints from me – I’ll be outside on my bike.

After posting this photo before heading out on a very chilly Saturday morning ride with the club, my friend called it “March Madness”. 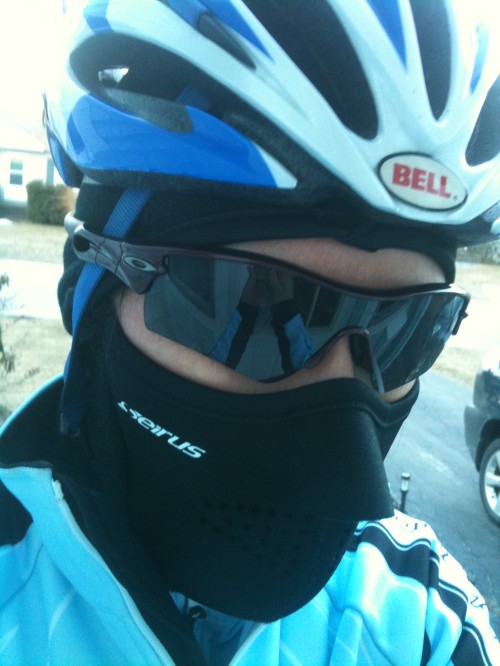 I have to agree with her. It was 21 degrees but felt like 12 with the windchill. So much for March, “in like a lion out like a lamb.”

We have seen below normal temps for over a week now. It feels like it will never warm up. At least this morning it wasn’t snowing like it was last Saturday morning.

The alternative to riding outside this morning was the trainer (yuck!) or waiting for it to “warm up” but having to deal with 20+ mile an hour winds. So a cold morning ride seemed like the best option for me.

I also wasn’t alone in showing up for the club ride. We even took a club photo before the ride. (Though this only represents only part of the riders that rode, many others just weren’t in the photo because they are not club members.) 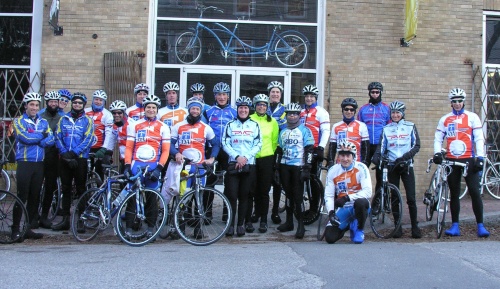 Been there; done that!

My goal was to go out tonight and ride a decent effort. I knew right away that my legs had nothing to give. And why should I expect anything different? They gave me a lot yesterday in the time trial.

It probably didn’t help that I didn’t have much for lunch today. My first day back at work after my vacation and although it wasn’t too crazy, it was a bit hectic during the lunch hours so I only ate a Cliff Bar for lunch.

I showed up at the ride after a 20-minute warm up. We started out on time and I promptly was dropped on the first climb. A nice OA/Cyclemania guy dropped back to pull me along the flat section before the turn onto Range Road, which can be a challenging road, especially with a head wind. I knew then I was done. I told him that I was peeling off the ride and not to wait for me.

So I just rode tempo all the way home. My legs felt okay when I stood up but when I sat back in the saddle they were just jello and would barely move.

I think I’ll spin them a little easy tomorrow and make the most out of Wednesday’s ride and also try to ride the Thursday night ride this week.

My friend and bike club member, Tracey, set her sights on making a Christmas Cheer ride this year. She had the thought last year but it never materialized. This year she set her sites on it and made it happen by rounding up participants, purchasing antlers and a Santa suit, and decorating a kiddie cart/tag along for a sleigh, complete with wrapped packages.

The ride started by going around Baxter Boulevard with a stop at a nursing home. Then it we dashed away to the Old Port to spread some holiday cheer. We were greeted with honks, waves and smiles. Some even took pictures!

It was a great day for it with temps in the low 30’s, sunny and no wind.

We all had a terrific time wishing Merry Christmas to the shoppers in town. Hopefully it will become an annual event!

I planned a casual ride with a couple friends for later in the day Saturday so I could go to the Farmer’s Market with my husband first thing in the morning. We’ve been away a fair bit on the weekends, not to mention my husband’s work has their own farmer’s market every week and the prices are much better than any other around, so we haven’t attended the Saturday one in Deering Oaks Park since late spring.

We were in search of non-paturized apple cider. Most places will only sell the paturized type and we know we can buy this item at the market. We were successful in our quest and bought 3 gallons!

I always love going to the market in the park on Saturdays. It’s great to walk around to see all the wonderful products grown and sold locally. 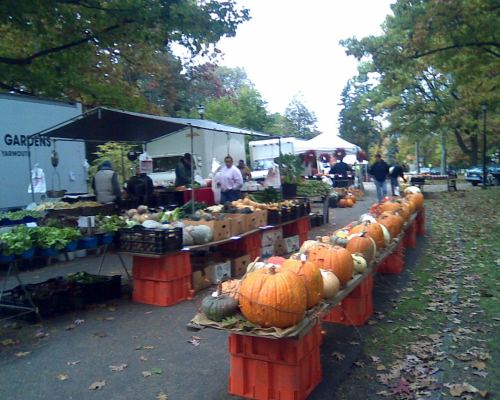 Then it was home in time to head out for the ride. It was overcast but surprisingly warm. I am so used to 50-degrees being somewhat chilly but that was not the case Saturday. It was actually mild and I found myself very over dressed.

It must have been Homecoming Weekend for Portland High, with the Battle of the Bridge football game taking place Saturday because the Casco Bay Bridge was decorated with signs by the cheerleaders. (I know a little about this because my daughter cheered for a few years for PHS and they were in charge of the decorating.) 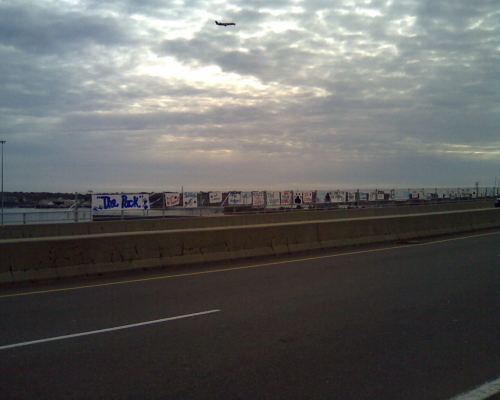 The ladies and I took our time on the ride and made sure we stopped to chat at Prout’s Neck: 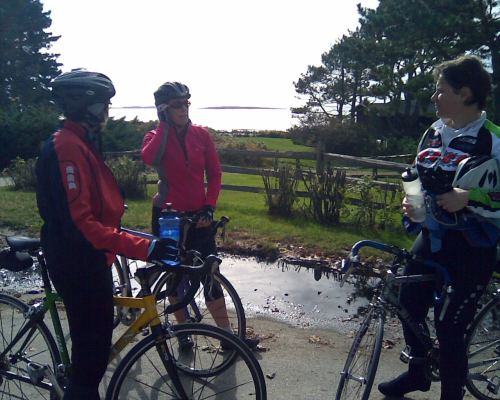 From here it was off to Scratch Baking Company for coffee and a little snack. I always buy a coffee for me and a lemon pound cake for my husband. I can manage to fit it into my jersey pocket without crushing it.

After some pretty heavy rain and wind Saturday night the sun poked through late morning Sunday. I was rather surprised. I thought it was going to rain most of the day and had prepared myself for some much needed cleaning and cooking.

I wanted to take advantage of such a spectacular day with a bike ride. I know we wouldn’t see many more days like this until spring. In fact the day reminded me a bit of spring and I was feeling a renewed sense of life, something I haven’t felt much of lately.

As it turns out there were a few people that were getting together for a ride. It was noon when I found out about it and they weren’t leaving until 2pm. That was enough notice to get a little cleaning done before heading out so I wouldn’t feel so guilty.

8 is not a bad turnout for an impromptu Sunday afternoon ride! With temperatures in the mid-60’s it was nice to be in shorts and short sleeves. 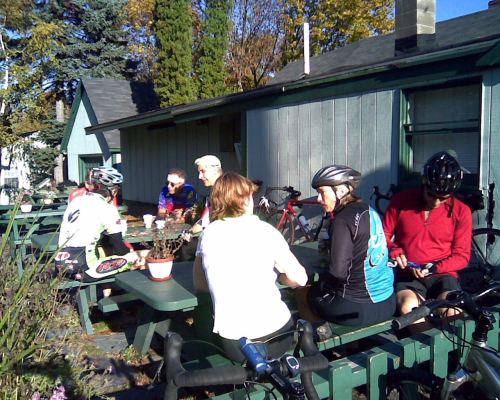 It’s now late enough in the season that the mid-week group rides have come to an end. It’s just too dark too early. So there will be more weekend rides throughout the fall. I’m looking forward to them. They typically consist of a good group of cyclists and involve a stop someplace for coffee. It’s a great social event.

Maine Velophile
Create a free website or blog at WordPress.com.